Angelina is a 16-year-old Ukrainian graphic artist who gave up an opportunity to study Graphic Design in New York to dedicate herself to the war effort. After the Russian invasion of her country, she and her mother left Lviv to live temporarily in Krakow. Her father stayed behind to join forces fighting the Russian soldiers.

Dr. Eduardo Dolhun, a Walter Adams Gallery client traveled to Ukraine several times since the beginning of the war and has donated medical services, medical supplies, and a hydration drink DripDrop (which he invented) to the Ukrainians. During one of his visits to help with the war efforts, he met Angelina. This is his story about Angelina:

“We met Angelina singing songs of protest in the city square of Krakow. Angelina gave us some of her artwork depicting the war in hopes that we would sell it and ·send the proceeds back to help her country. Angelina was also key to introducing us to individuals that guided us, ultimately, to the Lviv Military Veterans Hospital. While at the hospital we met Dr. Oksana Andreikiv who took DripDrop ORS to the front-line hospitals in Eastern Ukraine, to provide means of hydration to the soldiers who fought there.”

All proceeds raised from the sale of her art will go directly to the Ukraine war effort, a not-for-profit organization selected by Angelina: https://savelife.in.ua/

To view Angelina’s art or to purchase a print benefiting Ukraine, visit us at our Fillmore location or call 415-922-6811

The pictures are framed: the outside dimensions are 22 x 19
The price is $300. All of the sales will go back to Ukraine. 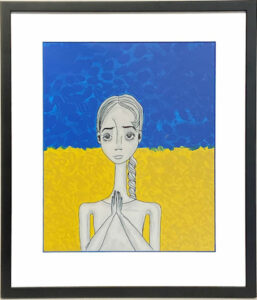 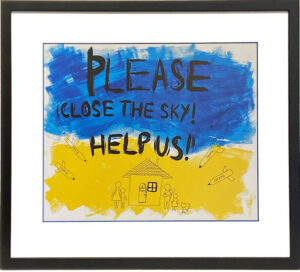 Please Close the Sky! Help Us! 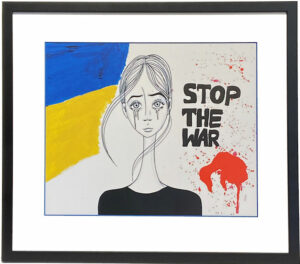 We Want to Go Home